On May, 25th 2018 (coinciding with Global Surgery Day), the World Health Organization (WHO) and its Member States unanimously accepted the Global Resolution on Rheumatic Fever and Rheumatic Heart Disease (RHD) at the World Health Assembly in Geneva, Switzerland. After years of global campaigning by non-governmental organizations and the wider civil society, the report was supported by countries from all six world regions, acknowledging the critical importance of addressing RHD.

In Western countries, rheumatic fever, characterized by polyarthritis, carditis, subcutaneous nodules, erythema marginatum, Sydenham’s chorea, fever, and arthralgia, is rarely seen in the 21st century, due timely diagnosis and treatment with antibiotics for streptococcus throat infections. In contrast, developing nations are still faced with a high prevalence of rheumatic fever, typically starting 20 days after the occurrence of strep throat (in 3% of untreated cases), and mostly affecting children between 5 and 17 years old. In these, case-fatality rates are as high as 5%. 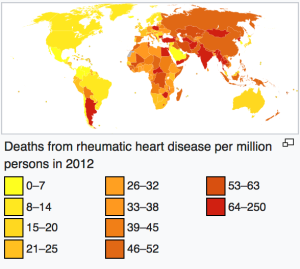 Although largely preventable, 33.4 million people suffer from rheumatic heart disease (RHD), with an additional 47 million living with asymptomatic damage to their heart valves, as a result of earlier acute rheumatic fever. RHD is the most commonly acquired heart disease for people under 25 years old and over 1.2 million suffer from long-term complications including heart failure, atrial fibrillation, stroke and infective endocarditis. RHD typically affects the mitral valve through a chronic process of inflammation and fibrinous repair, induced by group A beta-haemolytic streptococci (GAS), resulting in valvular thickening, commissural fusion, and shortening and thickening of tendinous cords, resulting in overall mitral stenosis. To prevent heart failure to occur, surgical treatment (balloon valvotomy/commissurotomy, valve repair, or valve replacement) is critical. 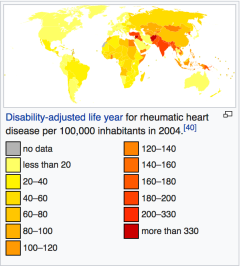 In developing regions, especially in sub-Saharan Africa and Southeast Asia, lack of low-dose antibiotics to timely treat acute rheumatic fever and diagnose RHD, incidence and prevalence of RHD remains high. Auscultation of RHD in these regions have detected RHD in 2.9 per 1,000 children, whereas with the availability of echocardiography, up to 12.9 per 1,000 children were diagnosed, urging for the availability of imaging modalities to adequately and timely screen for RHD. Similarly, close follow-up of patients and ensuring adequately controlled anticoagulation is vital to ensure good long-term outcomes, a feat previously unattainable. However, proper training of community health workers and decentralization of follow-up within primary health care can prove successful.

Despite the high incidence of RHD (and other heart diseases) in developing regions, access to cardiac surgery remains scarce. For example, in the United States, 1,222 cardiac surgeries are done per 1,000,000 population every year, compared to only 18 per million in sub-Saharan Africa. With a similar maldistribution of available workforce and cardiac centers between and within regions, existing global health disparities continue to sustain.

Recently, the Cape Town Declaration on Access to Cardiac Surgery in the Developing World was released as a consensus statement of experts in the care of RHD, in order to unify efforts to tackle the global burden of rheumatic heart disease. Building on this, the expert working group will regularly meet at cardiac surgical and cardiological conferences to put forward guidelines to prevent and timely treat RHD, in order to work towards complete elimination of RHD.